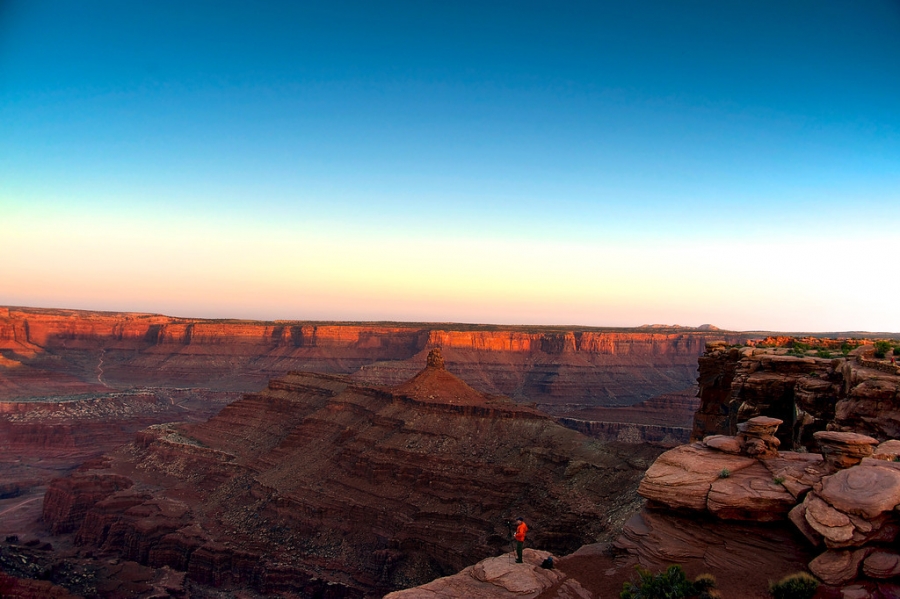 So we wake up just past  4 a.m., intending to go to Marlboro Point in the Canyonlands. Unfortunately, the combination of the early hour, the lack of sleep, no light, and unmarked dirt roads prevented us from finding our way there. I’m bouncing around in the covered flatbed of a pickup truck with one of our two local hosts, Rick Louie. The other local guy is Justin Balog who was up front driving. They’re both from the Denver area* and have been to the Moab area parks before and did an absolutely fantastic job organizing this weekend for everyone. But at the moment, they cannot figure out exactly how to get to Marlboro.  Our opportunity to photograph at dawn is going to come and go pretty soon. Finally, one of them says “whattaya say we cut our losses and just go to Dead Horse Point.” The other agreed. I just hoped that Dead Horse Point wouldn’t be a disappointing substitute, and then we get there and see this. I can only imagine what Marlboro Point must look like if this is cutting our losses, because this might have very well been my favorite spot in the entire trip.

* Apparently, local covers a lot more ground out West than it does here in NYC.

While I’m naming names and linking links, the other photographers on the trip were Mike Crisswell, Robert Lussier, Chris Nitz and Dave Wilson. That’s Bob Lussier in the shot above, and as it happens, he posted a somewhat similar shot of Dave at Dead Horse Point in his post today, in that both shots use one of our fellow photographers to provide a focus point and sense of scale to the image. Bob went with a black and white treatment, but I had to go with color take advantage of Bob’s orange vest, which both stands out and yet blends nicely with the beautiful tones of the canyon. Thanks for coordinating that Bob.