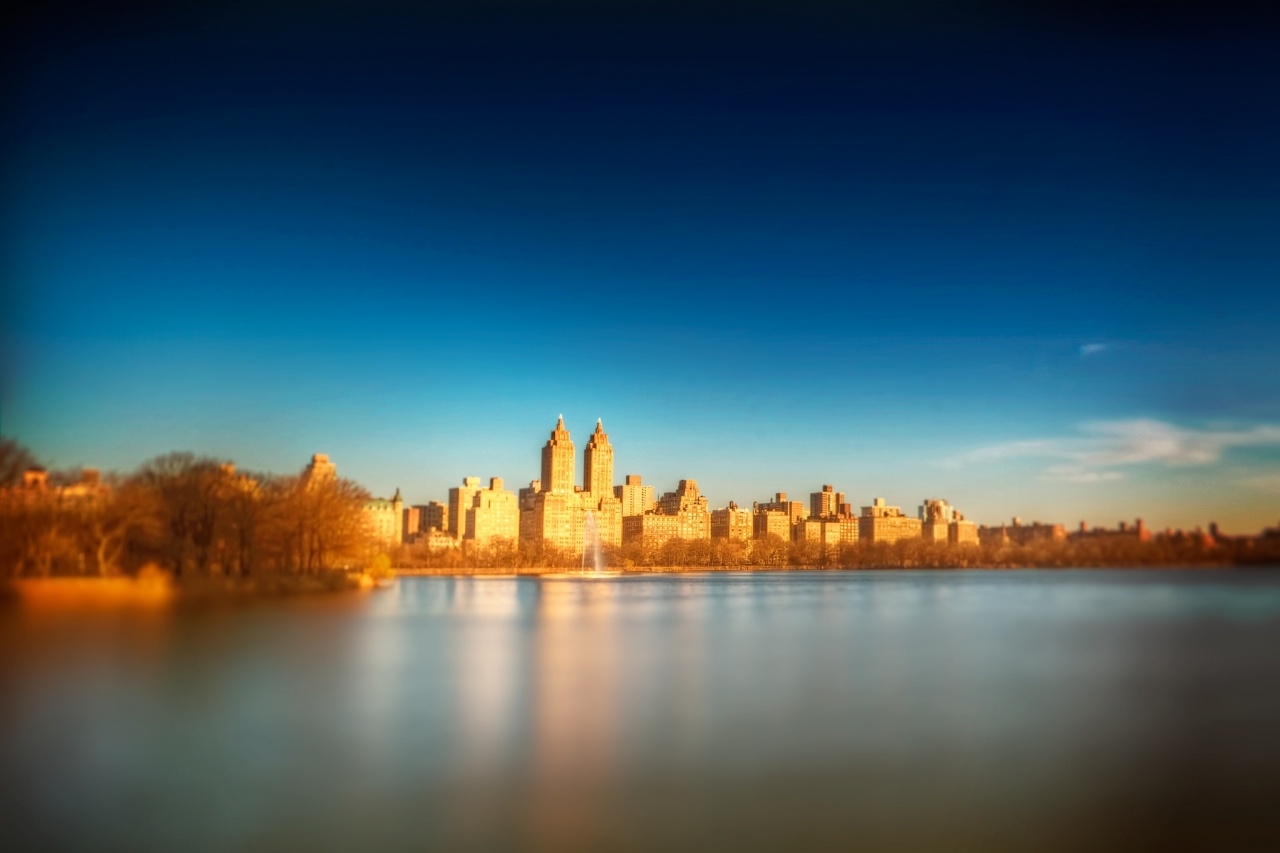 First note before discussing this image: Rob Hanson is today hosting another round of the HDR collaboration project with no name. Go check it out.

So this image has my head spinning because I don’t remember how I did it even though I took it just one month ago. On Sunday April 3, I hit part of the upper East side and popped in to Central Park. The Central park Reservoir has a running track circling it. If you ever saw the movie Marathon Man with Dustin Hoffman and Laurence Olivier, the running track and pump rooms around the reservoir figure prominently. One nice improvement since then is that a chain link fence that was a good 6-7 feet high has been replaced with an iron fence maybe 3-4 feet high, allowing for better photo opportunities.

I did not want to place my tripod anywhere that would disrupt the runners on the track, but I lucked out in that it had rained the night before, leaving a large puddle that the runners had to avoid anyway. I set my tripod directly above it and it turned out to provide a nice vantage point.

What has me confused is that I shot some brackets with the Singh-Ray variable ND filter that I also used in the Out of Phase picture. As I mentioned there it can sometimes create splotchy color shifts or dark/light uneven patches in the image. I’m not loving the filter. I also should mention that doing long exposures on HDR brackets seems to be an iffy proposition because the darker/shorter exposures will not really create the long exposure effect and the final tonemapped image might not have the effect you want. I can think of ways to work around it, but longexposures might be better suited to single exposures.

Anyway, I processed this image a day or two within taking the shots, and I remembered doing a lot of work to correct the color and tonal issues created by the ND filter.  But when I went back to the image this week I noticed that I actually created it from a regular set of brackets taken without the ND filter. And those images also had some color issues in the sky but not as bad as those that used the ND. I think the answer is that I switched to a different filter, maybe a warming polarizer, after first taking the long exposure shots. I don’t even know, and I also don’t know what I did in post to create the final result.

I think I must have used OnOne’s Focal Point to blur so much of the sky and water, but I don’t remember doing so. I do know that the image was taken with the Nikkor 24mm PC-E tilt-shift lens, so the focal distortion on the horizontal plane of the buildings across the park was created in camera. Whatever, I just hope people like it. I see a lot of flaws, but I also like it anyway.

Speaking of OnOne, I might as well remind people about the awesome deal on their software suite which is available for $349.95 until May 15 ($150 off the regular price). Also, they are making the beta of their Perfect Layers product publicly available for free right now. Click on the banners below for more information or to take advantage of these offers.