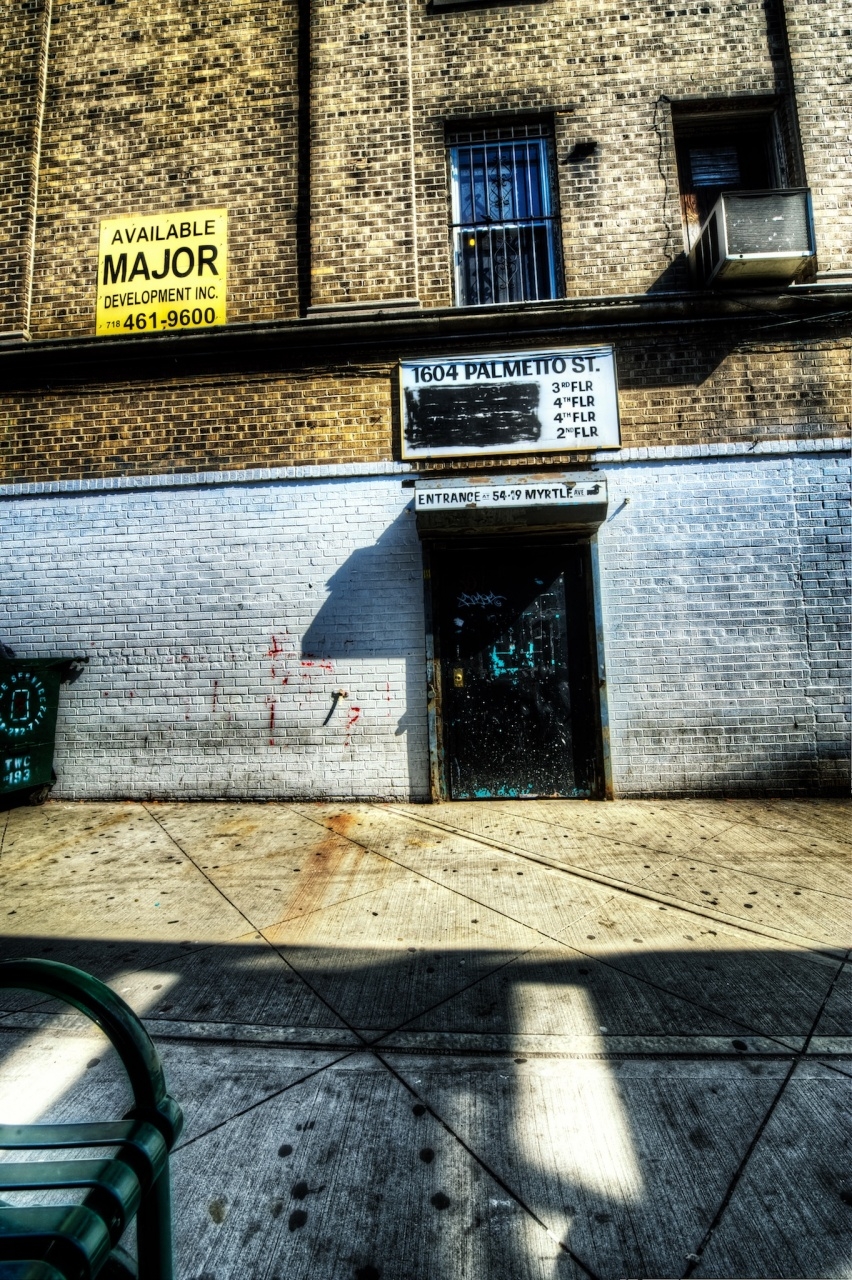 Yesterday, Bob Lussier had a post called “Off Centered” in which he confessed that he needs to better check his framing in the field, because the shot he posted came out off centered. I commiserated, and promptly fell for my biggest in-the-field compositional mistake, which is a tilted horizon. In my (partial) defense, I will note that if you look at the line where the sidewalk meets the building, it is only slightly off, but lens distortion really amplifies it the higher you look. I decided to leave it as is as a bit of a tribute to Bob, who had a birthday recently and is running the Boston Marathon today.

I spent a couple of hours shooting in the neighborhood of Ridgewood, Queens, yesterday, most of it under a spur of the elevated M Train line as it makes its way to its end point in my neighborhood of Middle Village. Those are shadows from the “el” in the foreground. I haven’t shot in mid-afternoon for a long time, and as much as I love the wonderful light I get at dawn, this was a refreshing change. This section of the elevated is unusual. It veers  off Myrtle Avenue a few yards from this spot, to run above Palmetto Street for a few blocks, and then it does something I have not seen in any other elevated. Instead of running above a street, it cuts right through the middle of several blocks above a series of back alleys. It is following an old street level train and trolley path. I’ll take you up the entire route over a series of posts.

The current Google Maps street view image for this spot shows that there was a spray painted sign for Richie’s gym on the wall to the left of the door. I believe the gym is still there, so I suppose they were just forced to paint over the sign, although the real estate sign might indicate that I’m wrong about it still being open.

Finally, my shooting day ended with a pleasant enough encounter with a couple of police officers. After I was back in Middle Village, I stopped to shoot from a bridge over a freight train line next to a cemetery.  A bridge, railroad tracks, and a tripod. Any of my photographer friends can do the math. But as I said, the encounter was pleasant enough. The officers were professional and doing their job. We chatted, and I showed them some of my portfolio on my iPhone. It was clear that they understood what the limits of the encounter were, and that I was not violating any laws or regulations. I also tried to explain the fascination photographers have with light, shadow, and perspective which makes train lines and bridges such catnip for us, although I’m not sure I was very effective. I did give the officers my card, so they might even stop by to visit here – If so, hello and welcome. Maybe the series of photos I will publish from under the M Train in Ridgewood will explain it better than I could with words.

If I could add one thought, it would be this. Even as I acknowledge that I’m no expert on catching terrorists and bomb planters, I do know photographers and photography. And you wouldn’t need a tripod for sabotage surveillance or to plan anything nefarious. Indeed, a tripod just draws attention, which anybody with foul motives wouldn’t want.  A small hand held camera or video recorder little bigger than a point and shoot could capture and record everything someone like that needed without drawing attention.  Officers, if you see someone using a tripod, I believe there is every likelihood that they are, like me, just taking pictures for art or for fun.

Finally, a notice: anybody posting nasty comments about police and photographers, or calling this encounter harassment, will have the comment deleted. As I said, these officers knew their stuff and acted appropriately. No need to be rude.