You are here: Home / Buildings / Some People Call Me Maurice 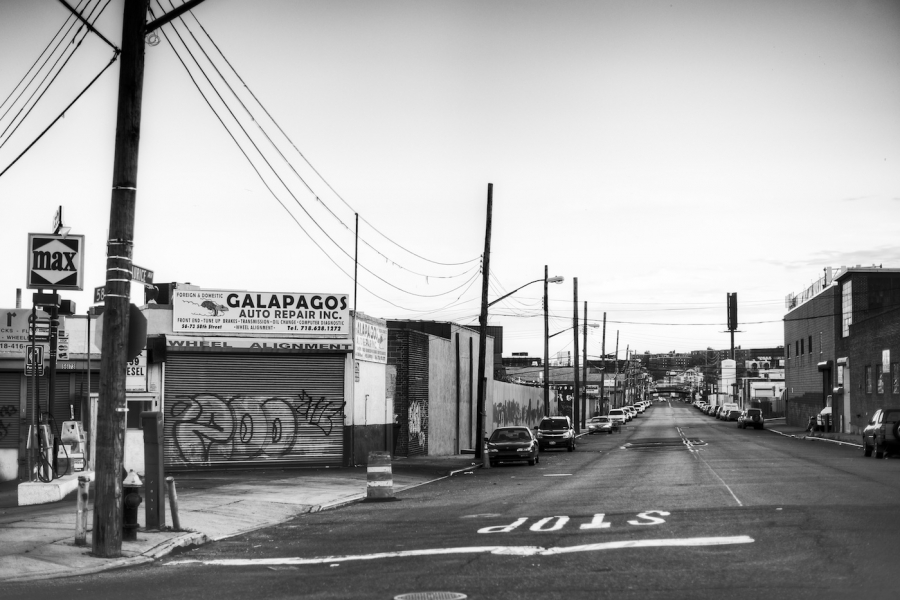 First up, I raised the size of the uploaded image from 1200 pixels wide to 1400, which most monitors should support.  So when you click on the image you will now get a nice big view of it.  I will use this size from now on.

This is Maurice Avenue in Maspeth, but pretty much everyone I’ve spoken to pronounces it as if it were Morris. I think I was standing in a slightly different spot, but essentially this is the view when you turn 180 degrees from taking this shot of the Clinton Diner.

It took a bit of digging, but eventually research revealed that the avenue is named for James Maurice (1814-1884), who had a distinguished career that included serving in the US House of Representatives.  The sources are silent, however, as to whether he spoke of the pompatus of love.  Probably not, because otherwise people would not mispronounce his name.

My processing was in part inspired by this shot by my Twitter friend James Howe.  James has a great touch for black and white conversions.  In the linked shot, he explained that  instead of using one of the presets in Silver Efex Pro, he instead picked a film setting that he liked and then played with the sliders to create the look he wanted.  I did the same here.  Every preset that added detail also made the overall image end up somewhat muddied.  I ended up raising the brightness level considerably, which blew out the sky, but that does not cause as many problems in black and white as it would in a color image.  As it happens, there was a pretty sky in the background, but before the BW conversion I had trouble making it come out as I wanted.   I should probably do a bit more black and white conversions of my HDR images.  I think sometimes I hesitate because, with the street candids, more than 50% of what gets posted here is already black and white.

Finally, today is Veteran’s Day, and this is not a particularly appropriate image.  I probably should have saved Monday’s image for today, but I wasn’t thinking ahead.  And even though it has nothing to do with photography or today’s image, I’ll steal an idea from another photo friend Tim Gibson and embed this video of service members returning home and surprising their loved ones.  The ones with wives, girlfriends and Moms are sweet, but it is the ones with their kids that cut to your heart.  I only wish the video lowered the volume of the music and retained more of the actual sound footage.  If you can watch the little girl sitting on Santa’s lap starting at around the 1:30 mark and not tear up, your heart is made of stone. Actually, that’s true of almost all the footage included.

Of course, the USO does a great job supporting service members and their families.

One of my favorite organizations is Spirit of America, which “meets needs identified by American military personnel in Iraq, Afghanistan and Africa for goods that will help local people. This improves relations, makes our troops safer and saves lives.”