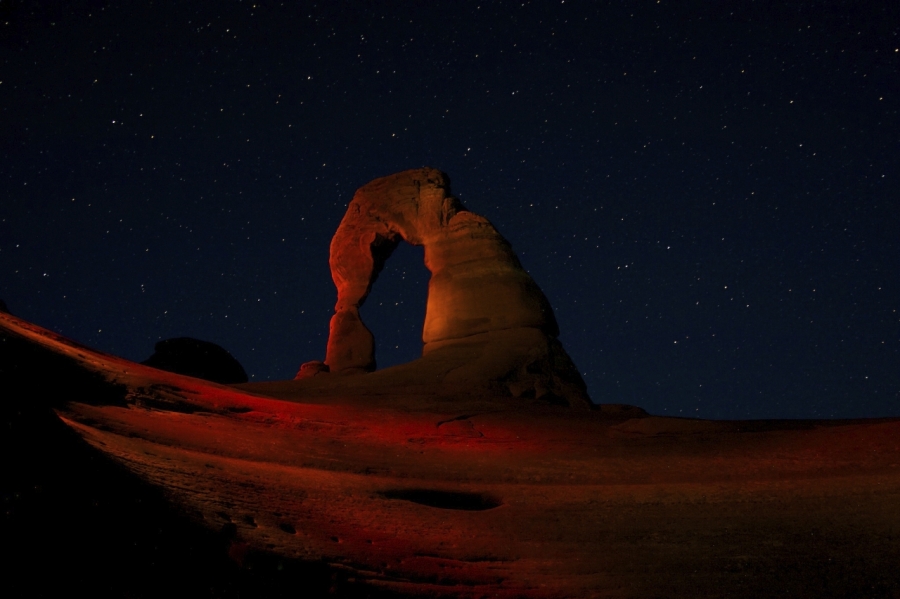 This was the capstone to an amazing day. This is the Delicate Arch in Arches National Park near Moab, Utah, about which much more later when I show some photos of it during sunset. For now, I’ll simply note that getting up to see this wonder is s bit of a climb and leave it at that. Our NXNW group plan for the evening was to wait out the other folks who made the trek to view this beauty at sunset, then do some light painting after dark. We knew we had a few short hours after sunset and before moon rise to get shots like this.

What we did not anticipate was that another group  would have the same idea. While we were still situated higher up above this bowl get shots of the arch at sunset, Justin Balog ran into big deal Sports Photographer Dave Black. It was our second run-in with Dave, who was leading a 3-day workshop in the area. We previously ran into his group when we were in Cisco. Justin spoke with Dave, found out that Dave was planning to lead his group on a light painting workshop, and Justin told him we had been planning on light painting ourselves.  Dave very graciously told Justin that our group could tag along with his. Dave is a mensch.

So we found our way to this bowl and set up at a respectful distance from the folks who paid for Dave’s expertise.  Instead of using our own light painting gear, we let Dave handle the honors. He stood up just outside the top left of the frame, and called out instructions. “4500 kelvin white balance, 30 seconds,  f/11.”   Then when everyone was set he called out “OPEN!”and you head a few dozen shutters “CLACK” open all at once.  Then 30 seconds of silence while Dave used a pair of special flash lights to “paint” the arch and the bowl in front of us with some light. It didn’t have to be silent, but it somehow seemed wrong to speak. Then another set of “CLICKS” as the shutters all closed within moments of each other. We did this maybe a dozen times or so, making adjustments to the camera settings, and Dave made adjustments to how he wielded the lights. I think this is my best image of the set.

Afterwards we walked down the same trail we came up, and while it was easier to go down than up, doing so in pitch black was a bit sketchy even with our own flashlights or headlamps.

But we weren’t done. We said good-bye to Dave Black at the bottom of the trail back by the cars, but then our little group decided we needed even more cowbell, so we drove to the Double Arches in the same park. There we  came upon yet another small group — I think it was a husband/wife team — already in place near the end of a very long exposure. I think they said it was 20 minutes, but maybe even 30, and our group nearly ruined it with our flashlights as we approached but we barely managed to avoid that catastrophe. We waited for them to finish, chatting and resting, and then tried to create more of our own magic. Unfortunately, my magic quotient for the day was full. My focus for the shots at the Double Arches was off. Way off. And while I can understand and excuse it due to it being pitch black and I was dead tired, it’s still a bit disappointing. But others got some great shots. Chris Nitz wielded our light source, which was supplied by Rick Louie. You can see shots from both Delicate Arch and the Double Arches From Bob Lussier and Michael Criswell. Justin also has a great shot of the Double Arch, as does Dave Wilson.

“Getting Back to the Angels” — Untermeyer Gardens, Yonkers NY