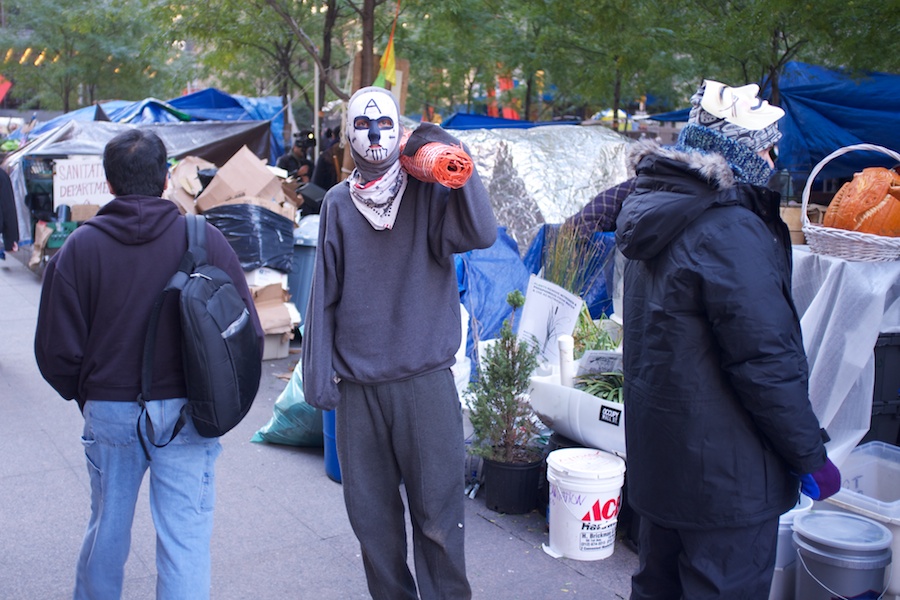 Without any sort of official survey, my experience for the past two years has led me to conclude that the political leanings of online photographers are similar to that of most online communities (excluding, of course, the overtly political communities):

Of course there are numerous exceptions to all of the above, and as I admit I have no hard data, you are free to disagree. But also for the most part, photographers keep their politics out of their photo work. Yet I have seen this general rule breached most often in the past month or so in response to the Zuccotti Park “Occupy Wall Street” demonstrations. Many, many local photographers have made a point of heading downtown, in some cases numerous times, to document the protest with a clear intent of lending support.
Everyone is of course free to do as they wish and to play their part or lend support as each sees fit, but I’ve been somewhat disappointed because, as best as I can tell, most of these people have also ignored the various Tea Party events that have been held in New York over the last two years. I’m not suggesting that any individual has an obligation to afford equal time or to be objective. Indeed, I think the opposite. But I also think that some photographers have let their politics blind them to an opportunity.

,” which was about the 2004 Republican Convention in New York City. You can see a selection of images from this project here. If you page through the book or review the images online, you will see that Steve has a point of view, and that it is not necessarily sympathetic to the Republican cause. He does not need words to convey this, and he does not treat his subjects with contempt or use extremely unflattering images. Yet you can still tell. Through his talent, skill and passion his point of view comes across,* and his images are compelling. I should also note that the book and project is not limited to images of Republicans, but also includes images of the media working the convention, police and security forces, and many protesters, also not sympathetic to the Republican cause. Steve treats them all with the same honesty and respect.

* A few months ago I had the chance to take a class with Steve and my inferences about his political leanings were confirmed. He certainly did not bombard the class with inappropriate political statements, but a couple of remarks made in context and discussion confirmed what I had previously concluded based upon reviewing his work on this project.

Anyway, I think the least interesting political photography is that which is overtly propaganda. I think you, and your views, are better served by trying to tell a story, not to present an argument. Further, I think you need to allow your subjects to tell their own story regardless of whether you support it or not.  When it comes to photography I think you best serve your cause — whatever that might be — by trying not to do so directly.

Anyway, for a variety of reasons it took me several weeks to make it to Zuccotti Park for the protest, and as it happend, I visited on the morning after the first cold night this fall. It was about quarter past 9 a.m., and most of the protesters were either still asleep or had just risen, and it was clear that many were finding it tough to remove themselves from the relative warmth of a bedroll and tent. As a result, I had few people to shoot and a lot of tents. This small gallery is the result. The fellow in the top image above was not only among the few awake and engaging protesters, but he was particularly eager for me to take this picture, so I decided to feature him above.

Finally, I want to be clear on one thing. This is a small work, quickly gathered and straight-out-of-camera. It comes nowhere near to matching Steve Simon’s Republicans book in quality or scope, yet I still believe it was informed and inspired by a similar approach.

Technical Note: the “Show as Slideshow” link does not work properly, so please just ignore it.