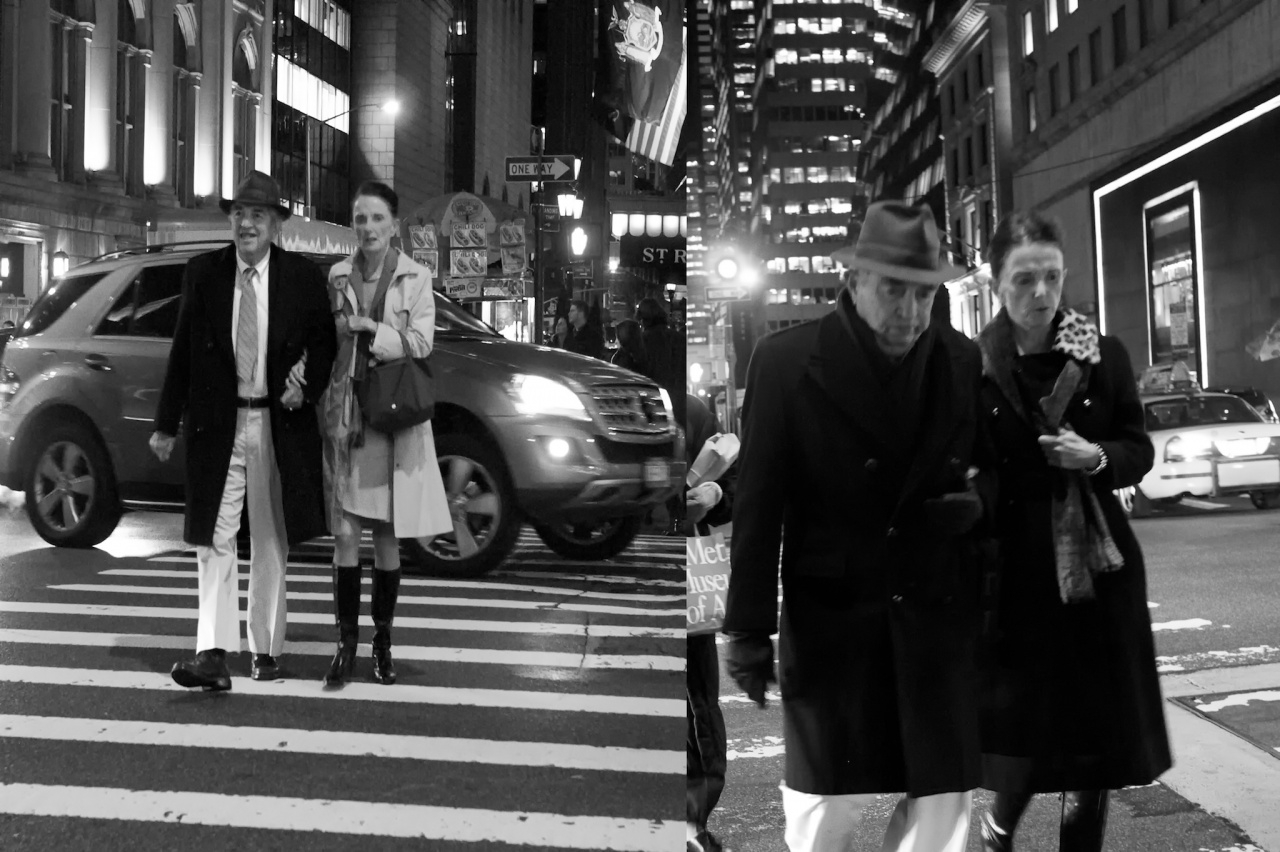 For the past few months, the decision of which image to post as number 100 for both the Crosswalk and Bus Stop series caused me to sweat a little. I did not want the pressure of picking the absolute best image, as my opinions vary over time and I do a poor job sometimes of predicting what others will respond to. I did save some of my favorites to use in the last few weeks, but I did not want to pick one single best image.
Then this happened. In early March this year, I shot this same couple, just over a week apart, at nearly the same spot and time of day.  I did not realize it when it happened. In fact, I think it was at least a week later as I was reviewing my catalogue that I had a sort of “Wait. What?’” moment when I switched from reviewing one project to the next and saw the same couple in both sets.  Right away, I knew I had my Number 100.
This series has been great personally. I hope every one else has enjoyed it half as much as I have had doing it.  I write a bit more about what the series meant to me when I post Bus Stop No. 100 on Friday.
I’m not sure what’s next. I have no similar projects in mind right now.  I also know that I will occasionally post crosswalk and bus stop shots, but it won’t be every Tuesday or Friday any more.
To celebrate Crosswalk 100, Bus Stop 100, and 365 days of consecutively posting at least one image daily with my fans, visitors, and supporters, I’m going to give away either a print or a book to one person randomly chosen from among those who have “Liked” my Facebook photography page on or before next Friday April 8.  If you have already Liked the Page, you are already entered (unless you “unlike” it between now and Friday).  If you have not already done so, you can enter by clicking the link and hitting the Like button while logged in to your Facebook account, or you can do the same thing using my Facebook Fan Page widget to the right. I will pick one winner at random, and that person will have a choice of either getting a free copy of my not-quite-ready book, or a comparably priced print of his or her choice.  The book should be ready to go in about 2 weeks, and I hope to have an online preview ready to share with the winner on a sneak peek basis by the time I announce the winner on Saturday April 9. The book will not include images from the Crosswalk or Bus Stop series, but will instead include my HDR images of New York City, usually devoid of people.
Tags: 20mm prime, a pen and a pancake, Black and White, Crosswalk Tuesdays, E-PL1, Manhattan, New York, Night, NYC