The HDR collaboration group with no name or schedule and a fluid membership is back!  I previously hosted entries here and here. The participants this round are Mike “TheaterWiz” Criswell, Jimmy Denham, new member/guest (like I said, it’s fluid) Scott Frederick whom we are all glad to have join us, me, Rob Hanson, and Bob Lussier (who is probably calculating the odds of being the last person listed alphabetically in a random group of six people when his last name begins with “L”).

The shot was taken at a railroad crossing in an industrial section of Western Queens, in the neighborhood of Hunter’s Point/Long Island City. The highway to the left (which also curves right and passes over the train tracks) is the western end/beginning of the Long Island Expressway, just beyond the Queens side of the Midtown Tunnel. You cannot see it, but about 100-200 yards to the right is the Newtown Creek, across which is Brooklyn. The tracks lead to a rail yard, which I think is shared by both the Long Island Railroad, and Amtrak, although I’m not completely sure of that. The street leading down the right is Borden Avenue.

I chose to share this image with the group because it had a lot of elements and a few challenges that I thought would lead to a nice variety of looks. For one, I managed to include one of my tripod legs in the shot, which I could have avoided if I were willing to lie down on the track bed in the cold to get a better look at the scene through my lens before shooting. As I told the group, they could crop it, blur it, vignette it, see if content-aware fill works, or just leave it in. In addition, HDR processing yields some barely discernable ghosting on the overpass and on Borden Avenue. Finally, and most interesting to me, the scene, although having a lot of elements, has no obvious focal point.  You could choose to emphasize the foreground track bed, the rails, the building with the Curl Up McDonalds billboard, or maybe something else I hadn’t noticed.

For my version, the visual story of the image was all about the warm tones of the building set against the cool blue sky. It helped that the morning sun was behind the building as I shot, adding a warm halo effect.  I have no idea what prompted me to add the rainbow, using Photo Tools from OnOne Software’s Perfect Photo Suite. I noticed the rainbow filter option several months ago when I first bought the suite, and never took it seriously. Too fake, too sweet, too much. Yet here it is.  I think it works here, even though it’s kind of ridiculous. The rest of my processing involved the Brilliance/Warmth and Tonal Contrast filters from Nik Software’s Color Efex, the Viveza plugin also from Nik, and some landscape enhancing filters, sharpening, and yes a rainbow, from OnOne.

Oh, and don’t forget. Join my Facebook fan page (see the right sidebar) by Friday to have a chance to win a print or book. Plus, tomorrow I post Crosswalk No. 100. 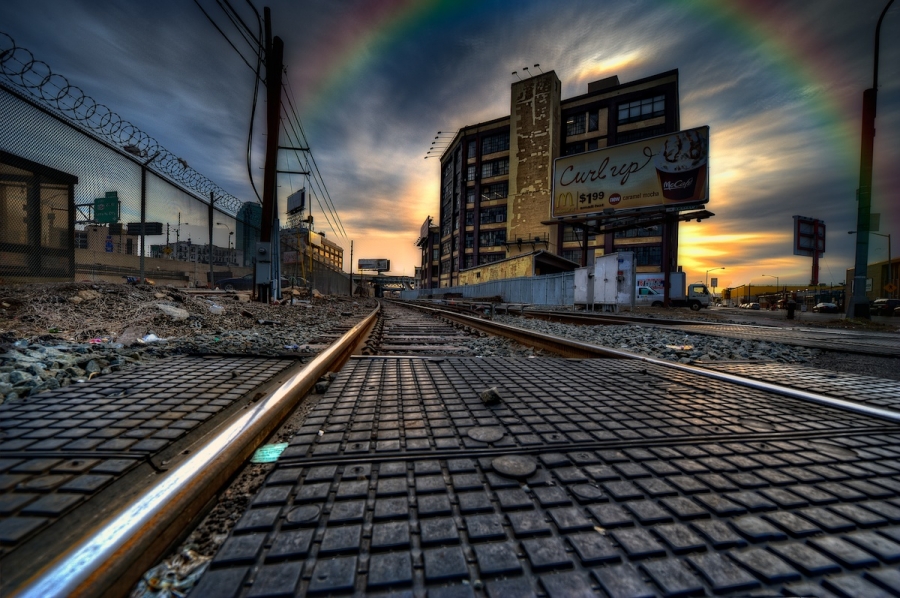 And now for everyone else’s versions, with their own explanatory words. 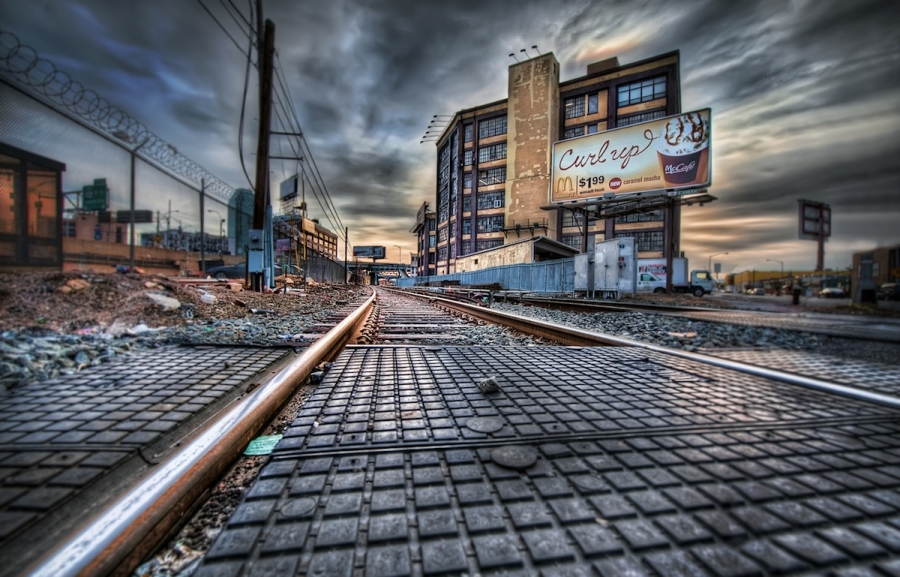 Thanks for the great set of brackets Mark!After looking at the brackets I was surprised how different the shot actually was compared to the email description Mark sent prior to the brackets. I ran them through Photomatix to get a feel and that wonderful HDR sky popped right out at me, right along with all the other interesting elements of the scene. I used 9 of the 11 brackets provided, leaving out the +4 and +5ev shots, I thought it would deter from that great sky. I usually like to tweak the crop a bit, but Mark, you cropped this perfect for my taste, I left everything pretty much as is. I did remove a couple of ghosting buses, and a couple other elements that I thought were distractions. I used some Topaz, High Pass sharpening, slight noise removal and finished the image with some NIK Viveza and some selective focusing via Focal Point. The more worked on this the more I liked it, thanks again Mark. 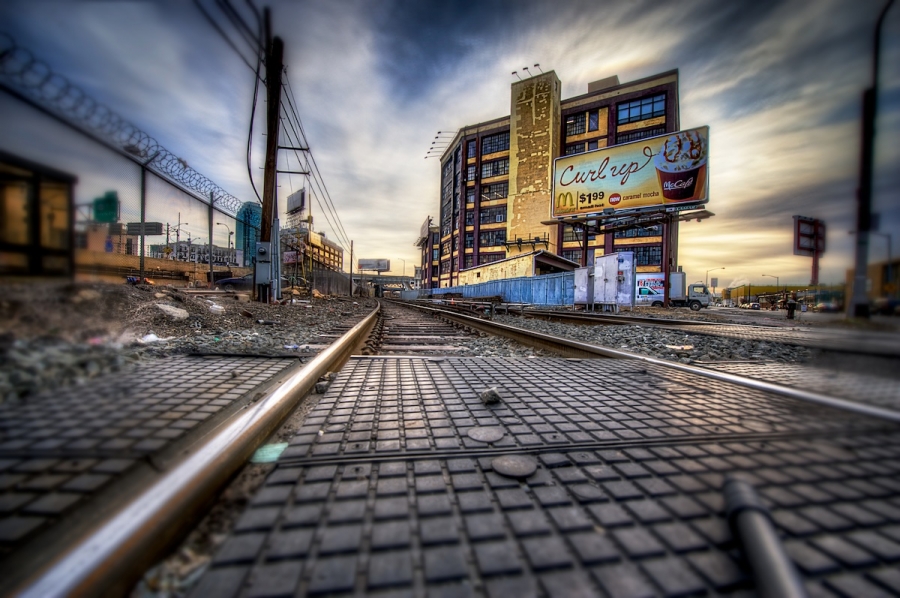 Thanks to Mark for a great set of brackets! I really enjoyed working on these, so much so that was I started, I could not stop. I loved the low angle on the tracks and the cloud formations, both seemed to work together to give a sense of movement to a very still image. My goal was to accent this effect by using selective focus on the yellow building and ‘Curl up’ sign in the distance and apply a feathered blur and vignette to the outside edge. I loved the way it turned out – like you’re going through a tunnel. 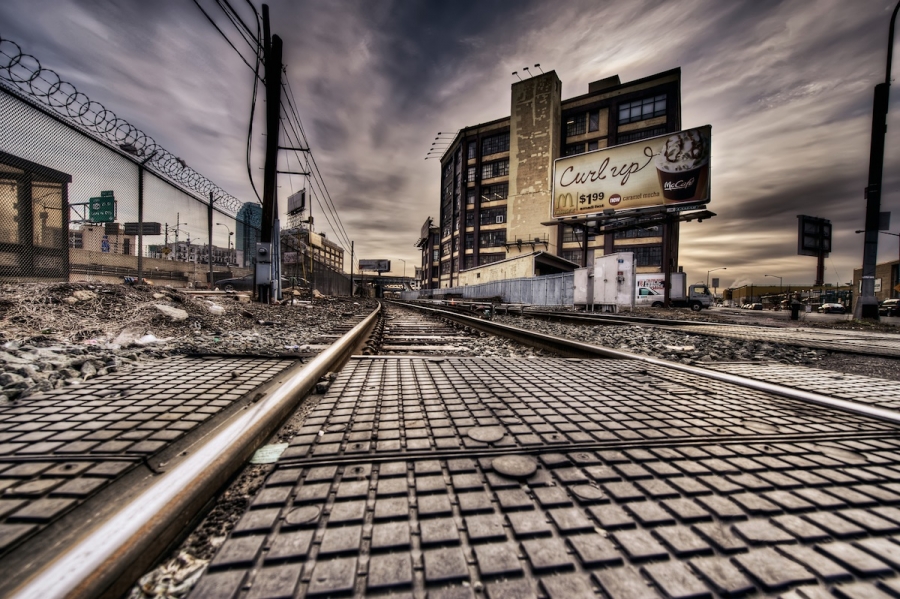 Thank you to Mike, Mark, Jim, Rob, Bob & Brian for including me and a big thanks to Mark Garbowski for providing a great set of brackets!

I decided not to alter Mark’s original composition, but he did leave a small obstacle in our way.  The dreaded tripod leg!!!  Well thanks to CS5 and Content Aware Fill, I was able to remove it.  It did a pretty good job, considering I’m not a Photoshop expert.

Mark provided 11 brackets.  I decided to use 9 of them and tone-map with Photomatix Pro 4.  After balancing out the brackets I fired up CS5 and corrected for wide angle distortion and applied some filters using onOne Software’s PhotoTools 2.6.  Some of the filters were applied globally and others were brushed in.

Next was PhotoTune 3 also by onOne to add a bit more punch and clarity.  I also utilized the auto color cast correction option and gave the image a sharpening boost.  From there I added some more contrast and reduced the saturation just a bit in Aperture 3, where I also brushed in some definition and added S-curve level adjustments.

As I’m writing this, I’m excited to see everyones entries.  I also look forward to contributing to these types of collaborations some time again in the future. Being included in this round is greatly appreciated.  You all rock! 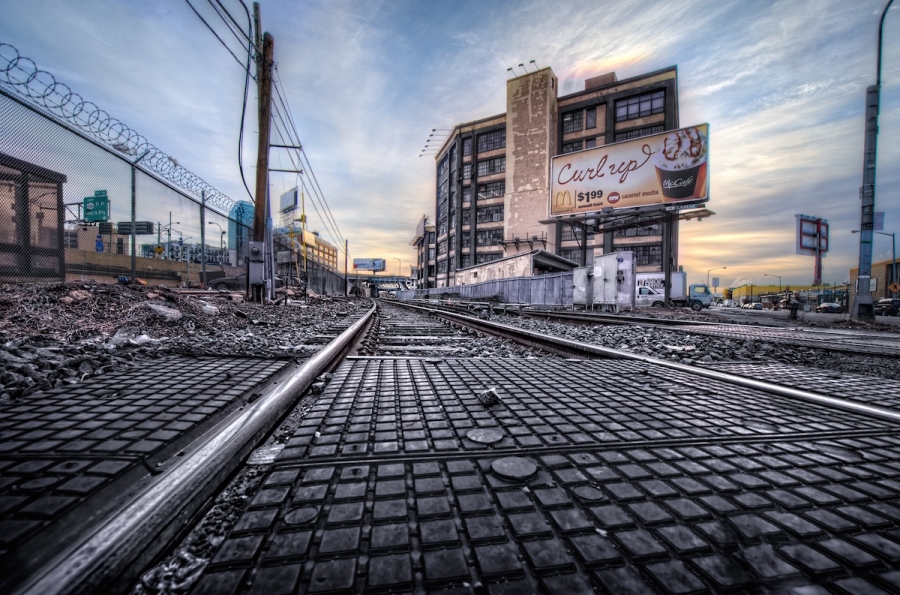 Thanks for another great urban bracket, Mark. I really savored working on this, and was taken in by the lines leading through the image — the train tracks, the fencing, the power lines.  Great composition.

I didn’t alter the composition much except to skew the image a bit, lining up the building a bit more vertically, which usually demands a crop. I cropped as minimally as possible, as there is a lot to look at in the scene.

After shadowmapping the details (a high-contrast B&W layer set to ~30% opacity, hard light), I fixed the blurred sky by masking in a single-exposure tonemap, juicing the colors up a bit.

Following the lines of the composition, I decided to lead the eye from cold-to-hot through the scene. To do this, I used a tonemap layer rendered to black & white in Nik Silver Efex Pro, but applied a mask with a linear gradient from top to bottom. This blended the saturation from B&W in the lower foreground to full color in the sky at the top.

Besides those two moves, it was just a matter of a few Hue and Saturation adjustments, brightening a few spots, a little Tonal Contrast, getting rid of the tripod leg, etc. I finished up with a LAB color sharpening technique on just the Luminosity channel, painting the sharpness in on a few spots, particularly the foreground rocks and tracks.

Great fun! Thanks for providing the set. 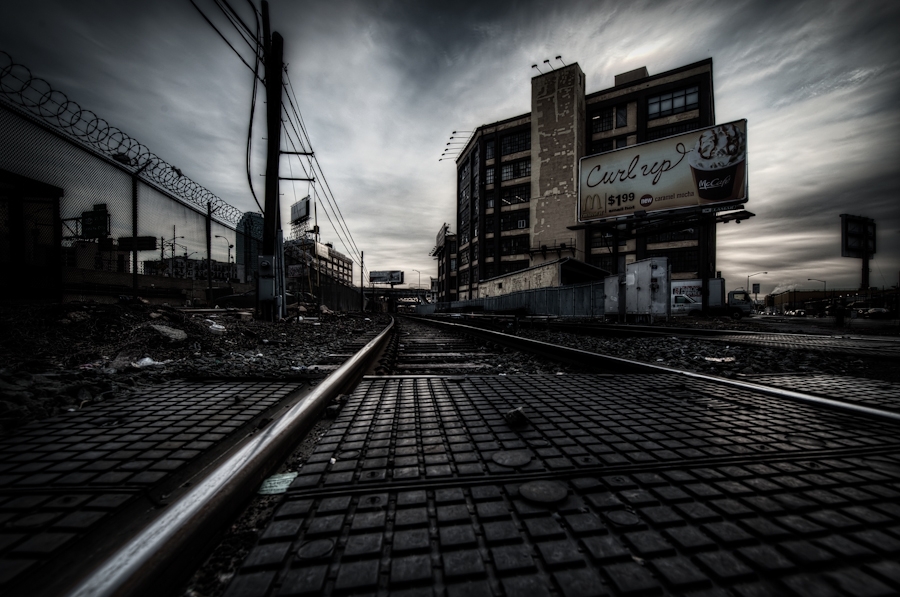 Mark provided a great set of brackets to work with. In fact, he never disappoints in that regard. I love the left rail leading into the image and the way the sky frames the building.  I chose to go dark on the processing to allow the light to pull your eye into the image. I also wanted to make sure there was enough details and texture in the foreground. One of my favorite things about HDR is its ability to bring out textures.

Thanks again, Mark, for giving us a great image to play with.

The Trend Is Irreversible