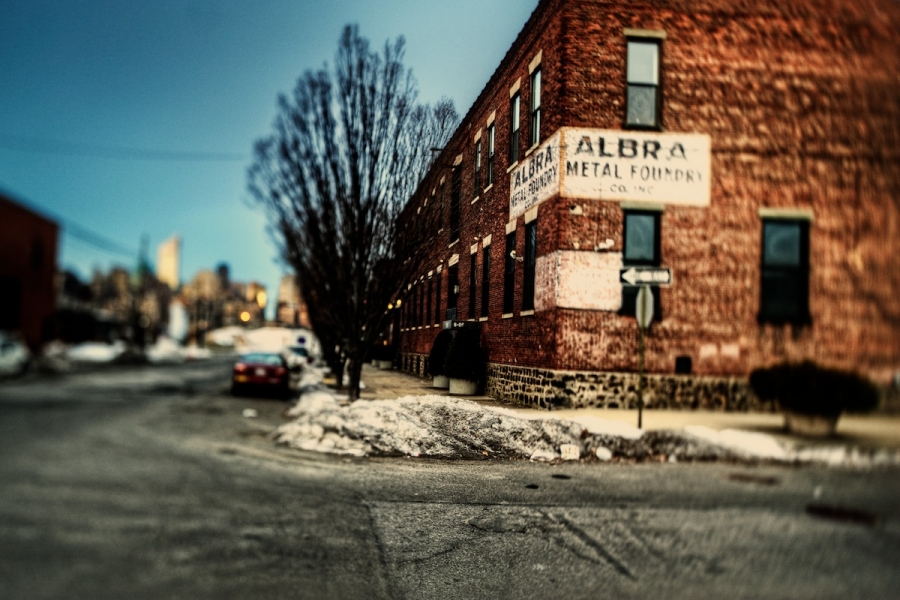 This location which was once the Albra Metal Foundry is now an event space known just as The Foundry. If you watch Top Chef, it was used for this season’s (the All-Star season)  Restaurant Wars episode. This is a neighborhood in transition. Blocks that  used to be nearly all industrial now have event spaces, hotels, restaurants, and apartments, but the industrial uses have not disappeared. Scouting around, it appears that currently the largest single industrial use is for commercial bakeries, including the Tom Cat bakery whose trucks are seen all over the city, including here.

If you search Google for “foundry,” you will find a substantial number of restaurants, spas, hotels and other entertainment venues that are either located in old foundries, or that try to evoke the feel of an old foundry from scratch. The funny thing is that almost all of them describe themselves as “one of a kind.”

Now for a bit of personal site business. I’m sure this excites me more than any of my audience, but I just sold two prints in two days which has never happened before. The odd thing is how they were strangely connected. Until October, I offered to sell prints through a service that was completely separate from this blog. They did a fine job with processing claims and creating good product, but there was no way to integrate the galleries there with the blog. So anybody who wanted to buy had to leave this site, and then search anew for the image they wanted somewhere else. Plus, I had to separately add each image to the galleries there, and it was just one more step in my work flow.

So in October I switched to Fotomoto, which places a “Buy Print” link under each photo here on the blog.  I also only have to upload the full size image to Fotomoto after somebody decides to buy it.

Two days ago, I received notice of a sale at the old location, which was odd because there is no way to find it from here. I can only surmise that somebody searched that site for a particular subject, found my photo, and bought it.  But that sale caused me to check my Fotomoto account, which has been completely inactive, and I realized that the inactivity was partly because I somehow broke the setup about 6 weeks ago and there were no links here offering to sell prints. So I fixed that, and the next day, yesterday, I sold another print through Fotomoto.  I eventually would have noticed, but if not for the random sale through the old service 2 days ago, I certainly would not have fixed the Fotomoto setup when I did, and would have also missed the sale I made less than 24 hours later. I don’t think it means anything but it is an odd coincidence.

From The Before Times